If you have any other questions...
Contact Us
Toggle SlidingBar Area

Beijing is an enormous metropolis with a history going back thousands of years, every year millions of people come to Beijing to see the capital of China, a fast changing metropolitan city of old and new. There are lots of tourist attractions and historic sites in Beijing. If you only have a short stay in Beijing, you should visit the top ten places in Beijing.

Tiananmen Square is the most representative place in Beijing, lying in the heart of the city, It boasts of the largest square in the world. It is circled by Tiananme on its north; the Great Hall of the People on its west; on the east of Tiananmen Square lies the National Museum of China, there are Monument to the People’s Heroes and Chairman Mao’s Mausoleum on the south.
A ceremony for the raising and lowering of the Chinese national flag is held at sunrise and sunset every day.

Lying at the city center, to the north of Tiananmen Square, the Forbidden City was the imperial palace for twenty-four emperors during the Ming and Qing dynasties. it was first built throughout 14 years during the reign of Emperor Chengzu  in the Ming Dynasty (1368-1644). Ancient Chinese Astronomers believed that the Purple Star (Polaris) was in the center of heaven and the Heavenly Emperor lived in the Purple Palace. The Palace for the emperor on earth was so called the Purple City. It was forbidden to enter without special permission of the empeor. Hence its name ‘The Purple Forbidden City’, usually ‘The Forbidden City’.
There are over 9,000 rooms and over 250 acres.Make sure to wear comfortable shoes as you have to walk a lot!

Beijing is the political center of China, also it is the most strategic city yin the north. Many dynasties built walls in this area, Among many historical ruins of the Great Wall in Beijing, the wall built during the Ming Dynasty (1368 – 1644) is the most often seen and best preserved, running over 342 miles (550 kilometers) and containing about 827 city wall platforms, 71 passes and countless towers. The famous sections include the Badaling, Huanghuacheng, Mutianyu, Jiankou, Gubeikou, Jinshanling and Simatai.
For the Great Wall hiking, get ready for strong footwear. For hot weather, please also prepare for sunblock, sunglasses and water. For cold days, get ready for your hat and heavy coat.

The Summer Palace is northwest of Beijing, it is the largest and most well-preserved imperial garden in China. It covers an area of 70 thousand square meters and holds over 3000 houses. In 1860 and 1900 it was destroyed by invaders and in 1912 it was rebuilt by the Government of Qing Dynasty. In 1924, it began to be open to tourists, not all the buildings are open to the public.
Once a summer retreat for emperors, this 290-acre park is still a retreat for the tourists, who can relax here or walk around ancient pavilions, mansions, temples, bridges and huge lake. 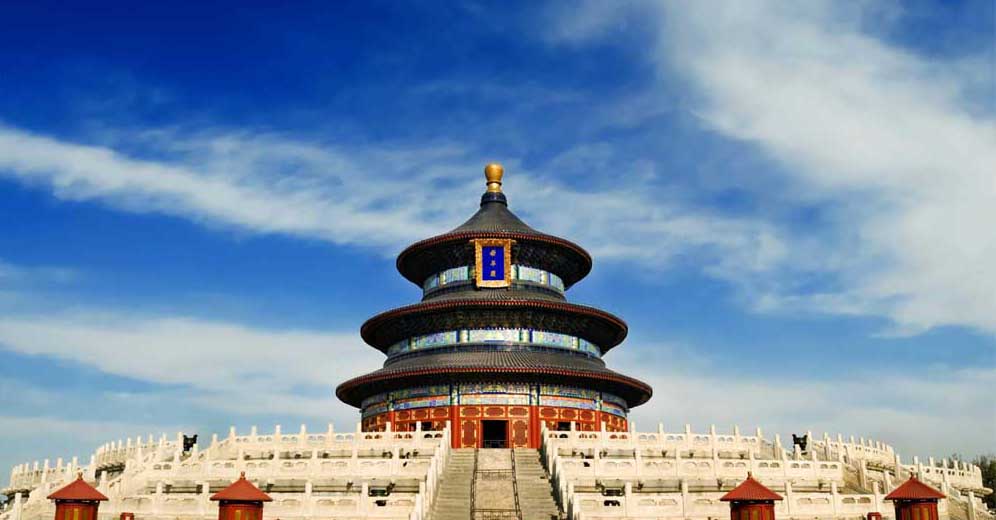 Temple of Heaven is situated in the southern Beijing City. It used as a complex of sacrificial buildings for the Ming and Qing emperors, and is the largest one in Beijing among several royal altars to Heaven, Earth, the Sun, the Moon and other deities or symbolic forces of Nature.
What makes the temple unique is the century-old trees – line upon line of Chinese cypress, Chinese juniper and scholar trees. Some of the cypresses are more than 600 years old. If you go to the Temple of Heaven in the early morning, you can see groups of people practicing all types of kung fu and taiji. 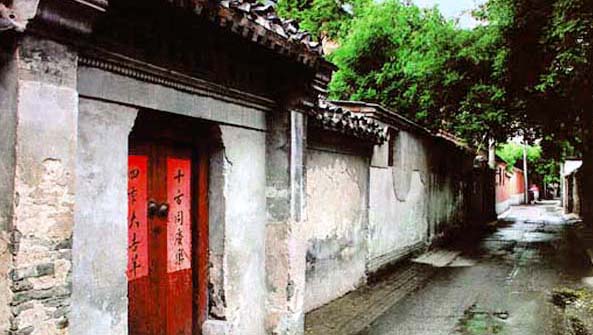 In the old Beijing hutong areas, you can find the ancient transportation tools now still preserved for tourists as the main traffic tool of visiting hutongs – Beijing unique old city lanes. The neighborhoods of narrow, twisting streets represent the “real life” of Beijing, where passageways connect to courtyards of traditional compact homes

Hutong is a Mongolian word meaning water well. At nine meters (about 30 feet) wide, it is the name given to a lane or small street that originated during the Yuan Dynasty (1271–1368). Now they have become representatives of local culture, thus it is the first choice for people who would like to learn about the local history and culture. 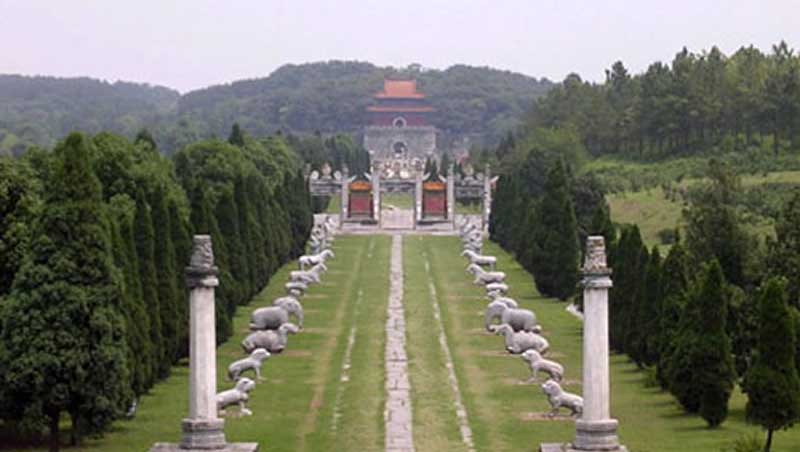 The Ming Tombs represent the imperial cemetery region where the 13 emperors of the Ming Dynasty were buried. Located 50 kilometers northwest of the downtown Beijing, noted as the 13 Tombs , this is the burial area of 13 out of 17 emperors of the Ming Dynasty, the ruling dynasty of China from 1368 to 1644.
In a carefully selected site, according to the Chinese feng-shui (geomancy) traditions, the tombs are surrounded by mountains on three sides and a river flows near them. The tomb area has been listed by UNESCO as World Cultural Heritage. The site offers insight into imperial Ming Dynasty life, including stone thrones, huge human and animal sculptures, and other evidence of Chinese culture and traditions. 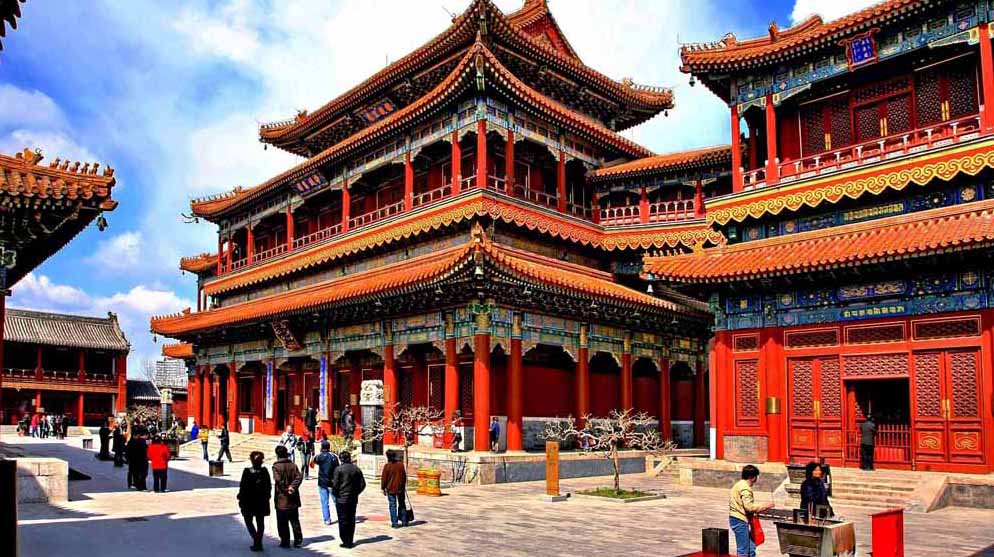 Lama Temple is in the northeast corner of downtown Beijing, has over 300 years of rich imperial and Buddhist history. It contains the largest wooden Buddha in the world. Lama Temple ( Yonghe Lamasery ) was built in the 33 Qing Kangxi year (1694) and it is now the largest and best-preserved Lamasery of Yellwo Sect in Beijing.
It was the residence of Emperor Yongzheng before his ascending to the throne. Built initially in 1694 during the Qing Dynasty, this building was the residence of Emperor Yongzheng when he was just a prince. However, in 1744 the Qing Dynasty formally changed the status of the dwelling to that of a lamasery, and so Yonghe Lamasery became the national centre of Lama administration. 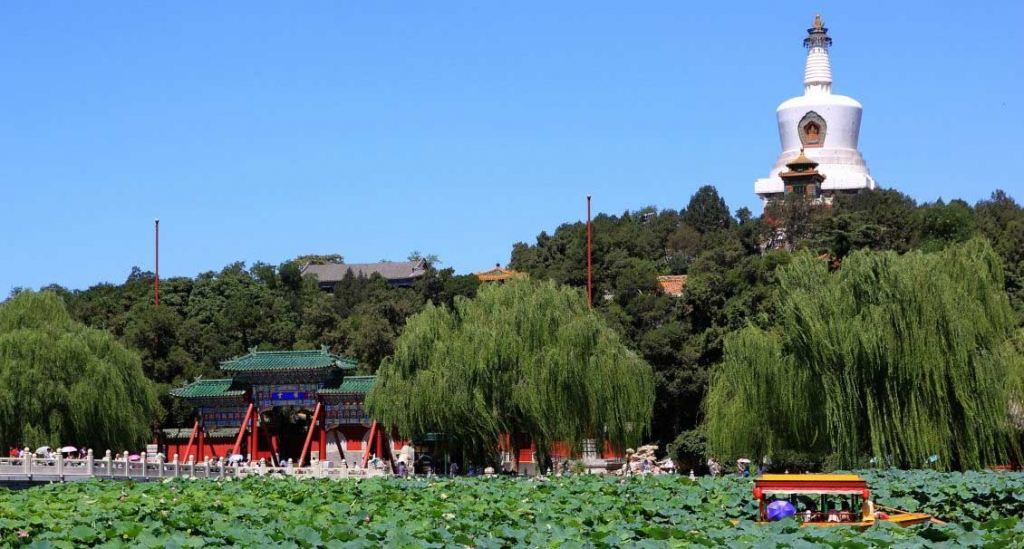 Located just to the north-west of Forbidden City, Beihai Park was once a winter palace for emperors in the past. It has an area of more than 70 hectares with a water surface of 39 hectares. To its north is Shichahai Lake and to its east is Jingshan Park.

No. 10  Olympic Sites  ( Chinese Pinyin: àolínpǐ gōngyuán  奥林匹克公园)
The Olympic Green, National Stadium and National Aquatics Center are three architectures constructed for the 2008 Summer Olympic. The National Stadium is the centerpiece of this project. 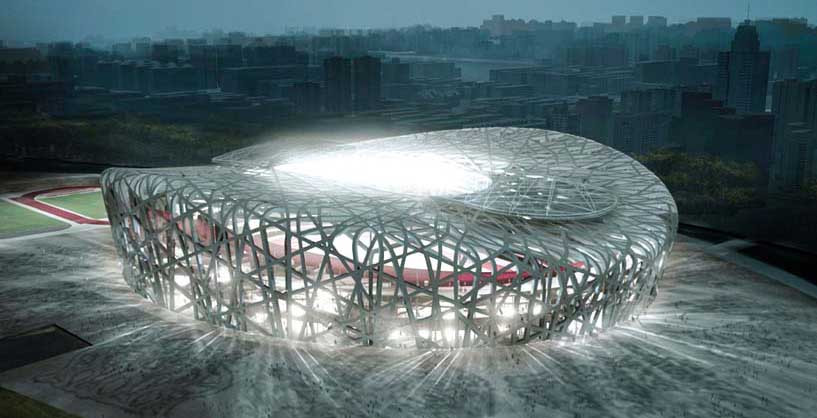 The National Stadium is located in the Olympic Park Central Area.
The National Stadium hosted the main track and field Football, and final competitions for the 2008 Summer Olympics, as well as the opening and closing ceremonies. The twig-like structure and the bowl-shaped roof are the masterpiece of the project. 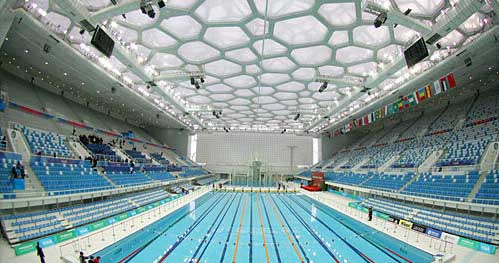 The National Aquatics Center (the water cube) is next to the Bird Nest. The National Swimming Center is the only important Olympic venue that is built by donations from compatriots from Hong Kong and Macao. It has a total floor space of 50,000 square meters with a seating capacity of 17,000. The center was used for swimming, diving, synchronized swimming and water-polo games during the Olympic Games 2008. After the games, the center has turned into a large water recreational center open to the public.