If you have any other questions...
Contact Us
Toggle SlidingBar Area
Previous Next
Chinese Class for Money from Beijing

Chinese Class for Money from Beijing

Learn Chinese money! When buying things in Beijing, or other places in China, using Rmb, have you thought about what is shown on the back of China’s bills? Today’s Mandarin Chinese class is about Chinese money.

The Great Hall of the People (simplified Chinese: 人民大会堂) is located at the western edge of Tiananmen Square, Beijing. It is where the National People’s Congress is held and also where state leaders hold diplomatic meetings and the masses stage political activities.

As one of the “Ten Great Constructions” completed in celebration of the 10th anniversary of the founding of PRC, it was built in just 10 months in September 1959. Facing east, the hall covers an area of 150,000sqm, 336m long from south to north, 206m wide from east to west, and is 46.5m high. The building’s total area is 171,800sqm, it is said to be the biggest hall in the world. 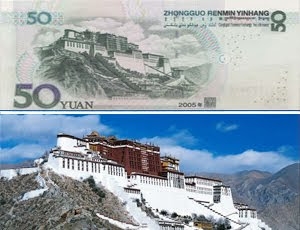 Situated in the red hills of Lhasa, Tibet Autonomous Region, the Potala Palace ( 布达拉宫 ) is considered the pearl of Tibet. It is 117 meters tall with 9 floors, including the palace, many temples and a courtyard. It combines the functions of a palace, castle and temple in one magnificent building.

The palace was listed on UNESCO’s list of the World’s Cultural and Natural Heritage sites in 1994. Its unique Tibetan style architecture makes it look all the more magnificent and mysterious, and attracts tourists from all over the world. 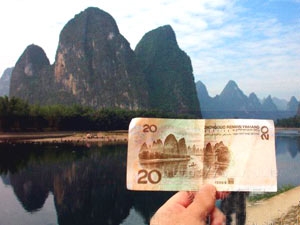 Guilin, the national key tourist city and garden city, is located in Guangxi Province in southwest China, on the west bank of the Li River. “漓江( líjiāng ). Imagine boating on the famous “漓江( líjiāng ) Lijiang River.” As you enjoy the picturesque gumdrop mountains and scenic beauty along the river, you will feel like you are traveling within a painting. 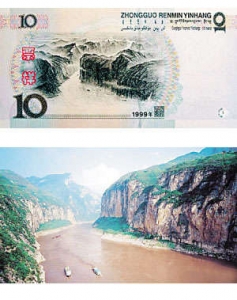 The Kuimen Gate, located in Fengjie County of Chongqing District in southwest China, is the gateway from the Sichuan basin to the Three Gorges at the Yangtze River with high mountains towering on both banks. On the cliff are engraved five characters (Kui Gate, the Grandest of All). The gate is so named because Fengjie County was named Kuizhou in ancient times, for which the Qutang Gorge is also called “Kui Gorge”. Here, the Yangtze River rushes through the gate to the east.

The Kuimen Gate is only 8 kilometers long and is also the narrowest part of the Three Gorges, but it is characterized by its marvelous natural beauty and cultural artistic heritage as well. 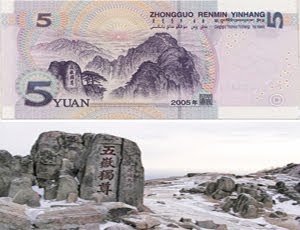 Mount Tai, located in “泰安( tài’ān ) Taian City” in Shandong Province. Since ancient times, Mount Tai is recognized as holy and sacred Mountain. It is known as “Most Revered of the Five Sacred Mountains”. Furthermore, Mount Tai symbolized the peaceful life and unified country. Four thousands of years, more than a dozen emperors paid their homage to the mountain.
Mount Tai has a reputation for its magnificent sceneries-the sunrise, the sunset, the special sunlight and the sea of clouds are often called the “Four Remarkable Spectacles”. It is respected by billions of Chinese people and becomes famous all over the world as well as treasonable heritage of panhuman. 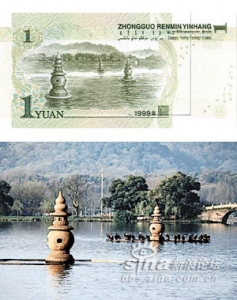 One old saying goes, Paradise in Heaven; Suzhou and Hanzhou on Earth. “三潭印月( sāntányìnyuè )” is a landmark of “西湖( xīhú ) The West Lake” in the center of Hangzhou.

If you want to travel to China and are wondering where to go, heading to the places featured on your money might be a great way to start.