If you have any other questions...
Contact Us
Toggle SlidingBar Area
Previous Next
Things You Should to Know about Chinese Drinking Culture

Things You Should Know about Chinese Drinking Culture

Chinese drinking culture you should know! Perhaps you are a manager who is about to attend a few business dinners or you are meeting your significant other’s family at a dinner in China. A multitude of etiquette considerations occur also when dining. There are some special differences in table manners from western countries.

1, Many people who can be seated comfortably around a round table conveniently face one another, so a round dining table is very popular in China. There are unspoken rules for who sits where.

In formal banquets today, being seated far across from the door is a sign of honor. The most notable guests will be seated near the guest of honor position, furthest away from the entrance, back facing the wall.
The “least important” person of a banquet sits closest to the entrance of the room, directing and communicating with servers. 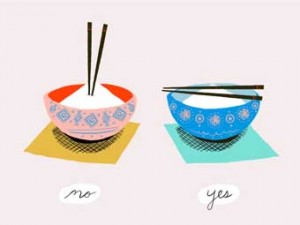 Dining may only begin once the host and all his guests are seated. The host should actively take care of all his guests, inviting them to enjoy their meal. A plate of Kung Pao Chicken (gōngbǎo jīdīng宫保鸡丁) arrives, landing directly in front of you. You should turn the rotating table clockwise and let others (especially the top seated person) have a bite. It’ll come back to you later.

Chopsticks, There are many no-no’s such as twiddling with chopsticks, licking chopsticks, or using them to stir up the food, gesture with them or point them at others. Never place your chopsticks upright in a bowl, as this is the way to sacrifice and is therefore considered to be inauspicious.

Gānbēi 干杯, translates literally as “drying the cup.”, Whatever you’re drinking — báijiǔ (Chinese liquor 白酒), vodka, beer, wine，you’ll be doing toasts one after  another, and toasts mean drinking up。 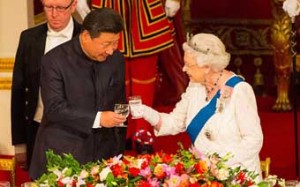 If “(gānbēi 干杯) ”is called, don’t worry, “gānbēi ” does not mean you have to finish your drink (despite the literal translation of “dry cup”). Just take a sip and put your cup down. Elderly people and superiors should be served first.

One should pay attention not to raise his/her glass higher than those of the respected elders; When two glasses clink, how high people hold their glasses shows hierarchy. When the host toasts you, keep his glass higher. These insights hold true at most dinners with hierarchy, such as corporate dinners with bosses, meals with clients and multi-generation family gatherings.

Sometimes you’ll just want to stay sober. There are ways to do it, for example, you might not be forced to drink if you’re driving. Or if you’re a woman, Chinese women are not required to drink as much. Or if you remember to pretend from the beginning that you “don’t drink” — but then you have to stick to it till the end.

jìngjiǔ 敬酒 : “respectfully proposing a drink.” People will likely toast you to show their respect and hospitality. As a foreigner, you’re not expected to do likewise, but it will be much appreciated if you do. Once you’ve started, make sure you toast everyone who might outrank you. If the people are many and you’re worried your head might not take it well, you can tick them off in twos and threes; it’s perfectly acceptable.

When someone toasts you, you should immediately stop eating and drinking to accept and toast in response. All people sitting at the same table must stand up, upon the initiative of one of the guests, and toast in succession; Remember, one should never refuse to participate in a toast. If you turn down a drink, your Chinese counterpart may feel like he has lose his face.

If you’re the one offering the toast, you’re putting yourself in an inferior position, which means you have to be the more respectful one. Thus, it’s better if you stand up and empty your cup completely. The other person may remain seated and drink just a bit, but usually they will go out of their way to show you the same respect.

A formal dining is always accompanied by tea, beer or distilled spirit

1, The one who sit closest to the teapot or wine bottle should pour them for others from the senior and superior to the junior and inferior. When someone hands you a cup of tea, take it with two hands. When you give someone a cup of tea, use two hands. (One hand on the bottom, on hand on the side).
2, When someone pours you more tea, it’s polite to touch the side of the teacup as they pour it, and be sure to say “xiè xie” ( thank you 谢谢).
3, If you ever pour tea for someone else, fill the cup 3/4 full. (When pouring alcohol, top it off, brim to the rim.)

The End of the Dinner

Don’t worry too much. Your hosts know you’re used to a different way of doing things and they’ll not expect you to follow their rules. If you observe them, you’re scoring extra points. They simply want to make you feel welcome, you just put on a big smile — drink up whatever they give you. Gānbēi  干杯!